Notice: Trying to access array offset on value of type bool in /var/www/html/cronin-website-api/wp-content/themes/cronin-2022/template-parts/content-blog-detail-mantle.php on line 19

Notice: Trying to access array offset on value of type bool in /var/www/html/cronin-website-api/wp-content/themes/cronin-2022/template-parts/content-blog-detail-mantle.php on line 20

Salute to our Veterans

Nov 14, 2016
Notice: Trying to access array offset on value of type null in /var/www/html/cronin-website-api/wp-content/themes/cronin-2022/template-parts/content-blog-detail-content.php on line 17

Notice: Trying to access array offset on value of type null in /var/www/html/cronin-website-api/wp-content/themes/cronin-2022/template-parts/content-blog-detail-content.php on line 18

Notice: Trying to access array offset on value of type null in /var/www/html/cronin-website-api/wp-content/themes/cronin-2022/template-parts/content-blog-detail-content.php on line 19

Notice: Trying to access array offset on value of type null in /var/www/html/cronin-website-api/wp-content/themes/cronin-2022/template-parts/content-blog-detail-content.php on line 20

Notice: Trying to access array offset on value of type null in /var/www/html/cronin-website-api/wp-content/themes/cronin-2022/template-parts/content-blog-detail-content.php on line 20

The Cronin blog was created as a forum to discuss marketing trends, insights and opinions.

This latest entry does none of the above.  It’s about matters more important:  pride, commitment and sacrifice.

Last Friday, on Veterans Day, on a lark, I sent an email to the agency with a photo of my dad in uniform and the story of how he enlisted in the Air Force on December 7, 1941.  I asked if anyone else wanted to share stories of veterans in their families, and was amazed by the number, and the power, of the responses.

I’ll share them with you now.  They’re authentic and true.  They’re emotional and moving.   They connect on a very personal level.   Which, when I think about it, is exactly what all effective communication does.  So maybe this entry does belong on a marketing blog after all.

That handsome soldier at the top of the page is my dad, Paul Wolfberg.  On December 7, 1941 he was at the movies with his younger brother.  They stopped the movie and announced that Pearl Harbor was bombed.  My dad walked across the street to the Air Force enlistment office.  He was 19. He eventually became a mechanic with the 7Th Air Force, and wasn’t in any danger during his tour in the pacific – unless you count the time he accidentally stepped on General Jimmy Doolittle’s head during an inspection.

My Dad was a Navy man in the Korean Conflict.  He was a Seabee and helped to build the infamous Guantanamo Bay in Cuba!

My dad, Mario Felici, entered the army on March 30, 1943 at the age of 20. He served in the Euro-African Middle East Theater. He was a medic in the 289th Infantry. On February 3, 1945, while Company K was advancing into the town of Appen-Wihr, France, they were met with a fierce counter-attack. My dad, without concern for his own safety, rendered first aid to the wounded and dragged them to safety. As my mom tells the story, Dad was told to not try to pull others to safety, but he ignored the orders. Dad was awarded the Bronze Star Medal. Before being discharged on October 3, 1945, he was also awarded the Good Conduct Medal, three Bronze Service Stars and a Purple Heart for wounds received as a result of enemy action.

Both grandfathers served in WWII – one at the Battle of the Bulge (he had been a med student in the states at the time he enlisted in the army). I don’t have a copy of the picture but a newspaper took a photo of him caring for a survivor of one of the concentration camps  – he was there when it was liberated.

My other grandfather lied about his age and joined the Navy and was one of the 42,000 military and civilian personnel stationed in the “Bikini Islands” when they were testing the effects of Atomic Bombs on Navy ships.

My uncle served with Oliver North in Vietnam (marine) and for a time was MIA. After recovering from an ambush that nearly wiped out most of his platoon, he made his way home for Christmas – nearly causing my grandmother heart failure (who had already received the “we sorry to inform you” letter).  He was a Purple Heart recipient.

Both of my parents served in the army as well (my mother out-ranking my father for a time!).

This is my ex-husband Martin, he is now retired from the military after over 20 years of service. He served as Master Sergeant for VA National Guard 2-224th Aviation and the 1-169 Aviation for CT National Guard. He was deployed to Iraq in 2005 and Kuwait in 2009.  During one of his deployments, his unit was featured on Jimmy Kimmel during a holiday episode where each soldier got to shout out to their loved ones via satellite.

My father, who passed in 1998, left a large stash of photos and papers from his 22 years in the Navy. About 10 years back, my mom gave them to me and I was like a CSI investigator looking into every detail about the time he served aboard the Sam Houston from ’65-’69.  I was reaching out on various submarine websites asking if anyone had served with him. One person responded that he had, and had a story to pass on. I was floored when I read that the submarine they were on malfunctioned and had nearly sunk, but the actions my dad took saved the submarine and the people in it.  When I asked my mom about it, she responded “He told me nothing,” which probably was true as it was Cold War — secret info. Things like this were not divulged.  When I told my then six-year-old son about the email, he said “So, Grandpa was a hero?” I still get choked up about it today.

This is my grandfather, Salvatore Rinaldi, who served in WWII in the U.S. Army 3rd Armored Division, and later the 13th Tank Battalion, as both a tank driver and tank navigator (the guy whose head stuck out the top of the tank and gave signals to the driver to go right or left by tapping his foot on his shoulder.  I think today we would call that a target).

At the age of 25, his battalion was stationed in Germany on D-Day with orders to be carried into France by truck to meet up with their tanks that were being brought into the country on water transports, but at the last moment his battalion was ordered to return to base.

He didn’t talk much about the war, but one story that stuck with me was how as a supply officer when food was hard to come by, he kept his soldiers fed by rowing a boat into the middle of a lake, throwing a grenade into the water, and then rowing around to pick up the fish that floated to the surface after having been knocked unconscious by the blast.

He gave his dog tags to me when I was a kid, and I wore them around my neck on the day of his funeral, just five years ago when he was nearly 93. 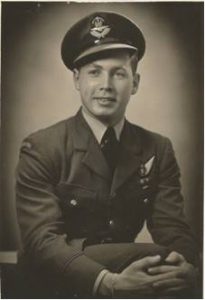 My dad was a member of the Royal Canadian Air Force, and was a POW in Germany for over a year.  Here’s the story in his own words, told 54 years after it happened, in 1997:

“We were on our way to the target when our rear gunner reported over the inter-com “fighter coming in”. Soon I saw tracer fire heading for the starboard engine. They then burst into flames. Our pilot soon gave the order to abandon the aircraft.

I was first to bail out. We were at approximately 18,000 feet. As I drifted down over Germany my watch said 8.0 P.M. I landed on a hillside, back of a village below. My parachute caught in a tall tree and I landed with my feet about 6 inches from the ground. I pulled the chute down from the tree and hid it in the bushes. I then found railroad tracks nearby and walked for several miles along the tracks until I decided it would be more wise to find a road to follow.  While walking I saw two soldiers coming towards on me the opposite side of the road. They passed me without saying anything, then they stopped, turned and shouted at me to “HALT”! They then grabbed, one on each arm & shouted again “Vo is der Comerades?” I had no idea.

They took me to the town office not far down the road. There they interrogated me for as much information as I could give them. We were allowed to give only name, rank and serial number.  Next I was moved to the town jail. Then I was placed on the second floor with a window. After one or two nights a Luftwaffe sergeant came to escort me to a train that would eventually end up in Frankfurt. While waiting for the next train, the sergeant bought me a beer. I was 20 years old then and this was my first beer ever! The sergeant was very understanding and a sympathetic young man who had been involved in several bombing raids on England.

I was taken to the interrogation center for a stay of several days. They treated me as well as could be expected under the circumstances. Then I was moved along with others to a P.O.W. camp in Eastern Germany. We traveled in a cattle car marked (40 men or 8 horses) to a place near Muhlberg-on-Elbe. It was named Stalag IV B. I remained there until late April, 1945. We were then liberated by the Russians and remained under their control for a week or more. We were then flown back to England by way of Paris.”

A final note from the author:

I’ve been a creative guy in the advertising business for over 35 years.  The email I sent to Cronin staff to encourage them to tell their stories may be the most fulfilling thing I’ve ever written.

Thank you for taking the time to read this.